Having spent quite some time in dear old Lebanon, it just had to happen. There is no way one can spend one full week here without getting pissed off at something, and this time it's the traffic signals.

Not that few people respect them, that was expected.
Not that they are often offline, they are connected to our famous electricity grid after all.
Not that quite often a police officer will ask you to stop at a green light or drive through at a red light, the government just loves to confuse citizens.

What pisses me off the most is the way they are setup at intersections.
Some smart moron decided to split the traffic on intersections on each direction:
One light for those wishing to go left, and one for those wishing to go straight and right. This way they can have the opposing directions go together, since maybe, maybe, in foreign countries, it was demonstrated that this is more efficient... except we are in LEBANON.
So what ends up happening is the following: I want to go right, so I take the right lane. But 99% of the time, it happens that the guy in front simply wants to go straight (either because he doesn't know or because he is simply an asshole) ... What happens? Either he respects the law and waits for the straight lane green light, or he breaks the law and poses a risk for the opposing direction traffic.
Both cases, it causes disruption in traffic, and eventually chaos. And mainly me waiting at least twice for my traffic lane to go green.

So please, please, if anybody has access to the moron who designed the system and never bothered observing the outcome, please let them know that in Lebanon, it makes more sense to have each direction go alone, with all green on all lanes.
Posted by Z Lebanese at 7:34 PM 1 comment:

With parliamentary elections fever heating up in Lebanon, it is only fair to say that we desperately need to get our attention on other less stressing issues.
And I just learned about one... Seems JEITA GROTTO (aka Mgharet Jeita in Lebanese) qualified for the next round of elections for the New7Wonders of Nature. I was quite happy given that I participated in the first round of voting like many of you, but wasn't really expecting that we'll make it to the first round.
Let's admit it, we are like 4 million Lebanese in the motherland, and maybe some other 20 million spread all over the world, and that's nothing compared to other countries.... Still... WE MADE IT.
So, let's do it again, and vote in this next round. As of posting this blog entry, we are ranked 7 in our category... not too bad.

Let's build the momentum here, and send emails to our friends, post info on our blogs, facebook, just about anywhere. And most important, tell our non Lebanese friends to vote for JEITA GROTTO as well. If you have more ideas, feel free to comment on the story :) 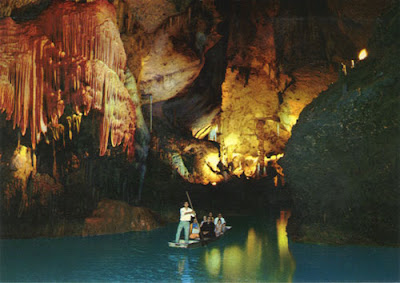 I will be putting the voting ad on my blog until the vote is over.
You can also click here to go to the voting page.

It's been a while since I wrote anything here... I was lazy... but hopefully that's over now.
Maybe I was uninspired, maybe I couldn't find any subject that wouldn't be interpreted politically. Not that I am neutral, I AM NOT. I even get into heated debates that lead nowhere.
By now, it is clear that nobody will change their political beliefs... You already know who you will vote for... Probably the same people your ancestors used to vote for.

Anyway, coming back to blogging... I saw today a billboard for the new Green Party of Lebanon.
Yes, seems there is a bunch of environmentalists who started a new party.
They have some nice slogans as well :
1- Join us, before geography (nature) becomes history
2- Because the earth has no sect (religion), join us

Will it be an effective party with bold initiatives, or simply another reason for some people to meet and issue statements ?
I guess time will tell...

Links:
1- Green Party of Lebanon
Posted by Z Lebanese at 6:34 PM No comments: